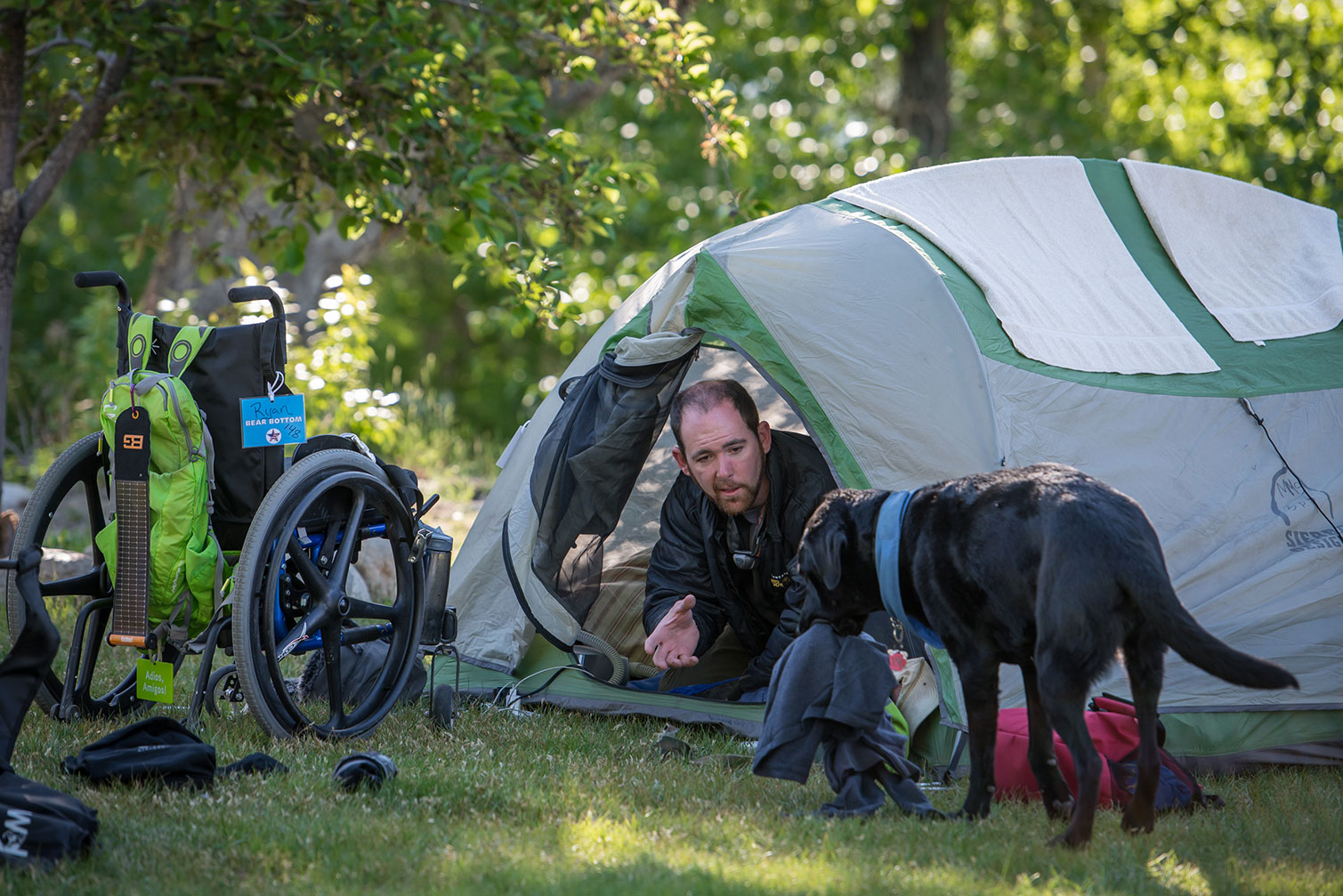 Ryan and his service dog, Docker, set up camp at McGee Creek

Day 1: Five days prior, the participants either arrived by a chartered vehicle from a military base in Southern California or by aircraft, which flies into Mammoth via LAX. It is suggested to register with TSA Cares if you need assistance at the airport. I personally arrived a little behind schedule on Monday. I missed the initial camp setup and opted to go straight to Mammoth Lakes Fire Station #1 for the BBQ Dinner. It was a great environment to meet the involved people and it also gave me a comfortable atmosphere to relax in after a day of travel.

After dinner, everyone headed to McGee to settle in for the night. Making camp after dinner was not an issue! I had to borrow a tent, ground pad, sleeping bag and pillow from Disabled Sports Eastern Sierra (DSES), which was already setup for me in an ideal location within our campground. There are about 15 other tents setup with the large location. There are restroom facilities very nearby, which are accessible.

The main DSES Tent, large dinning area, is just across a small gravel road and adjacent to several stocked trout ponds. Breakfast is usually brought in by “The Breakfast Club,” but there is always plenty of snacks and drinks inside the tent. The site is overlooked by a mountain range, which was engulfed in clouds and was left snowcapped near the end of the week.

I sleep with a Continuous Positive Airway Pressure (CPAP) Machine, which requires electrical power. Several extension cords were strung out to my site to help me out. I also brought a power strip, which was a convenient location to charge cell phones!   Although I must warn you that cell phone coverage is spotty at best within camp! I brought along my black lab service dog, Docker, who loves the outdoors, and he did not create any issues throughout the week. He quickly adapted to tent life and DSES staff or volunteers were more than happy to look after him while I was busy on the mountain. Our site was also right next to McGee Creek, which gave me a beautiful melody to fall asleep to.

Day 2: The second day of Operation High Altitude started out with a trip to Convict Lake, which is a mountain lake that is nestled in the Sierra Nevada Mountain Range. I was paired with several DSES Members and kayaked across the lake and back. I also decided to purposefully flip over the kayak to personally validate to water’s temperature reading. Yup, it was a bit chilly. I would put it in the 40-50 degree range.

After our time on the water, we were off to the Convict Lake Resort for lunch. The Resort made us some tasty pizza, which fueled us for fly fishing that afternoon, but first we received some hands-on instructions and tips. We then boarded the DSES chartered bus and headed to the trout ponds at our campsite. Now, it was up to us to put those newly gained skills to the test and catch dinner! We ate our bounty the following evening so that night’s feast was specially made for us by a renowned chef. We had lasagna, salad, and garlic bread. Oh, was it delicious! Capping the night off with s’mores by the campfire was a perfect way to end the evening! 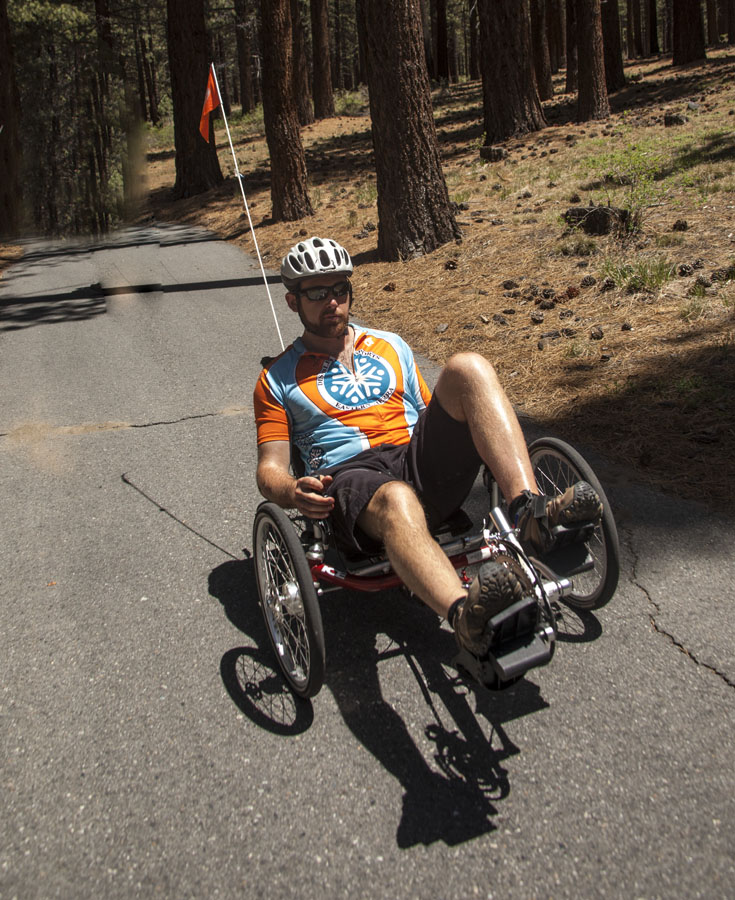 Ryan rolls out for some cycling from Shady Rest Park

Day 3: The third day was the earliest morning, rightfully so! We were up and headed out of camp by 0700 to meet our Fishing Guides on Crowley Lake. It is a large reservoir that is also known for its trout fishing. The largest fish ever caught here was a Brown Trout weighing 26 pounds! We met our guides and boarded the boats to troll the lake. My boat caught 7 trout that morning. We released most of them, but kept a select few for dinner that night. After fishing, we headed over to Shady Rest Park for a great lunch which was made by VFW Post 8988; another wonderful meal to give us that extra edge.

We were already in a prime location to do some cycling. Mammoth Lakes has a great paved trail network for bike riding that offers great views of the Yosemite like terrain! After the great ride it was back to camp for a Service Dog presentation by Todd Young of Canine Companions For Independence (CCI). Todd gave a very informative presentation, which hopefully opened the veterans’ eyes to the useful assistance and truly professional quality of dogs that CCI provides.

After the conclusion of the presentation, it was time to load up on Omega 3! The fish was beautifully prepared with lemon juice and spices, although it still had that very natural flavor, and there was pizza for those not wanting try some Mammoth Lake’s most popular aquatic mammal. That was a wrap for Day 3, unless anyone wanted to gather up at the campfire.

Sierra Mountain Guides outfitted us all with climbing gear and helped us climb up a rock face down the mountain the next day. This climb had an awesome view of the Eastern Sierra’s at the top! I had been climbing there before, but the weather conditions and mentorship [sic] were ideal. That easily helped to make it an excellent day! Watching everyone climb, including an amputee, empowered me and help push me to climb to the top which then only made me feel even more confident in my own physical abilities! Our on-site lunch was provided by Silver Lake Resort. 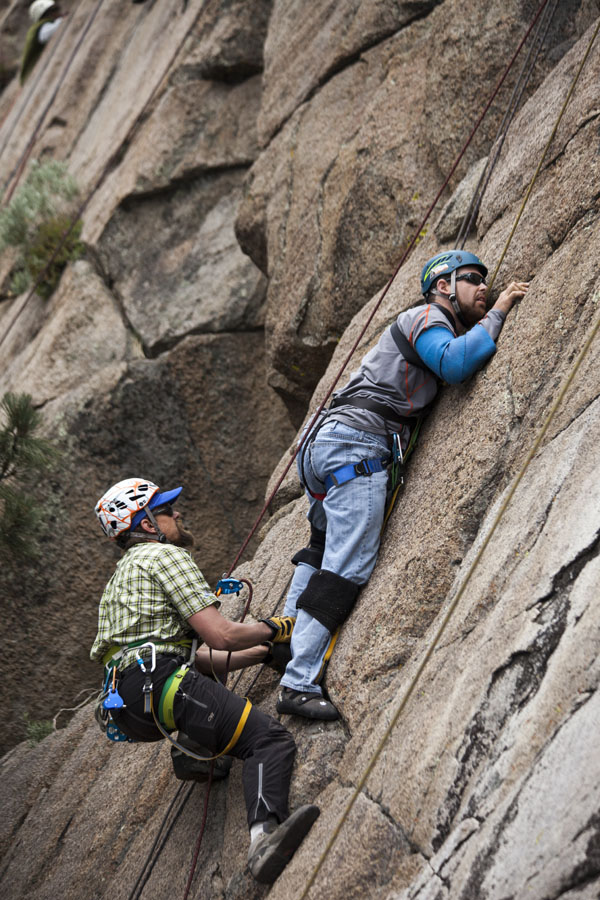 He left some skin on the rock face, but Ryan took his climbing skills to new heights

After lunch we could climb again, hike or bike. I personally chose to lay low. I donated a little skin to Mammoth Lakes and expended a bit of energy hauling myself up the rock face. Plus, I had to conserve my energy for the fabled “Hootenanny.”

A little rain didn’t stop the party back at camp. We shifted the party from a large open area to the main DSES Tent. Angel’s grilled some great food and a live banjo made it a true Hootenanny! This is something that you probably wouldn’t encounter in your normal activities in life, so it just shows you that a good time can be had outside your comfort zone!

Day 4: The last day was a mix of activities. The SoCal group headed out on their road trip home, while the remainder of the group suited up for some pool time. We spent about 2 hours horsing around in the water until we were forced out by the threat of lightening from the approaching storm clouds. We quickly changed and headed over to a bowling alley. However, we made a quick stop at a local coffee shop for a warm beverage.

We arrived at the complex and our group took over the last three lanes. I chose to bowl without the handicap ramp thingy. Yeah, that didn’t go so well. Me, I wasn’t competing with anyone but myself and I managed to have a good time.

My unintentionally routine gutter ball maneuvers only made everyone else’s throws look that much better. Ah, the glass is always half full. We played 2 or 3 games and then headed off to the Mammoth Airport.

Check-in at the aeropuerto was quick and painless. Shorty there after, everyone boarded the plane which was destine for LAX, and connecting flights were taken from there.

This ended Operation High Attitude. This is something that I seriously look forward to each year. Disabled Sports Eastern Sierra has a saying: “If I can do this, I can do anything.”

I never put much stock into this until recently. This past week helped to strengthen my body in safe environment with activities that I thoroughly enjoyed. I will put this boost in both physical and mental strength to good use! I already miss Mammoth Lakes and can’t wait for the next DSES event. I have such a high after something like this that’s hard to find elsewhere!

We are thrilled to have Ryan as our newest guest blogger. Ryan draws upon his experience from writing intelligence assessments and target packages in the military.  He took English Comp classes in rehab after his injury and more recently took Speech and several Psychology classes. Look for more of Ryans blogs coming soon………….