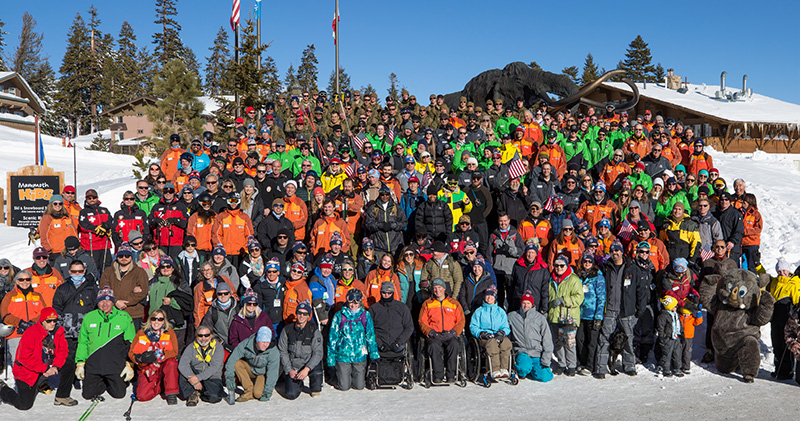 Operation Mountain Freedom took to the slopes and trails of Mammoth Lakes January 23rd to January 27th with one goal – to change the lives of Wounded Warriors from across the country. Disabled Sports Eastern Sierra rallied a community of support behind 58 injured service members and veterans and their families as they explored the exhilaration of winter sports and the beauty of the snow-covered landscape. With volunteer instructors from DSES and Mammoth Mountain Ski and Snowboard School, athletes spent three days skiing and boarding at Mammoth Mountain Ski Area, many for the ﬁrst time since their injuries. Whether skiing or snowboarding, Wounded Warriors pushed themselves to take on challenges and develop new skills. Marine veteran, Ronnie, applied his experience as a competitive hand-cyclist to mono skiing. “I had the time of my life learning a new passion on the snow,” he said. Eighty-seven-year-old Korean War veteran Bing found his ski bike exhilarating and inspiring saying “if I can do what I did on this trip, I can do most everything else.”

In addition to alpine skiing at Mammoth Mountain Ski Area, Wounded Warriors and their families spent a morning Nordic skiing at Tamarack Cross Country Ski Center. Blanketed in fresh snow and bluebird skies, the forests and vistas of the lakes basin combined solace and smiles with the physical challenge of skiing. By contrast, the afternoon ﬂying down the tracks at Woolly’s Tube Park was a raucous affair. Throughout the week, DSES and the entire Mammoth Lakes community took every opportunity to honor our Wounded Warriors and their families for their exemplary service and encourage them on the next steps of their journey. Captain Frank Frievalt and the Mammoth Lakes Fire Department along with DSES volunteer Alan Yata served up a delicious welcome dinner at Station #1, and Roger and Karen Curry opened their home for a home cooked meal and powerful conversations. Inyo/ Mono Veterans Services Officer Jessica Allmon gave a moving account of her own service in the US Army as the guest speaker at a delicious dinner provided by Ed Hurley and Burgers Restaurant, and the Good Life Café provided another special send off for our athletes.

This was such a great opportunity for me to get back to doing things that I once enjoyed and to spend some time with my son. All in all, this was the best week that I’ve had in a very long time, and I am very humbled. Thank you! – Brian, Sargent Major, Wounded Warrior Battalion, Camp Pendleton

Always a highlight of the week, Wounded Warriors, and their families passed through an Arch of Honor Thursday morning created by a record crowd that included members of a training squad from the Marines Mountain Warfare Training Center at Pickel Meadows. They were also celebrated as part of a luncheon featuring US Marine Corps General Kevin Killea and the presentation of a special award recognizing Frank Frievalt and the Mammoth Lakes Fire Department for their contributions to DSES’s Wounded Warrior programs. Disabled Sports Eastern Sierra would like to thank all of our sponsors, volunteers, and distinguished guests who helped make the 11th Annual Operation Mountain Freedom a success, especially Mammoth Mountain Ski Area, The Westin Monache Resort, Eastern Sierra Transit Authority, Sue Ebersold, Roger and Karen Curry, Burgers Restaurant, Good Life Café, and Mammoth Lakes Fire Department. As a community, we are able to make a difference in the lives of our Wounded Warriors.

This website uses cookies to improve your experience while you navigate through the website. Out of these cookies, the cookies that are categorized as necessary are stored on your browser as they are essential for the working of basic functionalities of the website. We also use third-party cookies that help us analyze and understand how you use this website. These cookies will be stored in your browser only with your consent. You also have the option to opt-out of these cookies. But opting out of some of these cookies may have an effect on your browsing experience.
Necessary Always Enabled
Necessary cookies are absolutely essential for the website to function properly. This category only includes cookies that ensures basic functionalities and security features of the website. These cookies do not store any personal information.
Non-necessary
Any cookies that may not be particularly necessary for the website to function and is used specifically to collect user personal data via analytics, ads, other embedded contents are termed as non-necessary cookies. It is mandatory to procure user consent prior to running these cookies on your website.
SAVE & ACCEPT
UPCOMING EVENTS